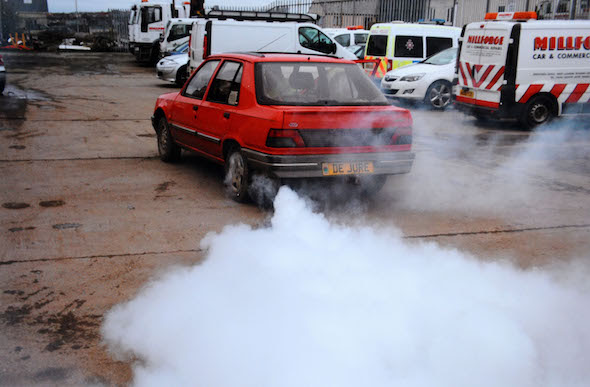 A speeding driver has been found guilty of causing danger to other road users by using a smoke device to try to evade police.The 62 year old man, from Hebron, near Whitland, Carmarthenshire had rigged the device – made from a bucket, pumps and hoses – behind the passenger seat of his Peugeot 309, and activated it when a police officer attempted to pull him over for speeding.  The contraption is usually used to kill moles.
However the James Bond-esque smokescreen backfired because pursuing PC Dafydd Birch was able to follow the cloud billowing out from the car as the man attempted to make his escape through country lanes and he caught up with the eccentric five miles later in a farmyard.
The man had denied causing a danger to other road users, but after a trial at Swansea Crown Court he was found guilty and handed a community order of 100 hours' unpaid work.
Sentencing him, Judge Elwen Evans QC, said: 'You caused smoke to be emitted on a village road in such circumstances that any reasonable person would know it was dangerous."You were driving a vehicle when a police officer told you to pull over but you took that officer a considerable distance of some five miles."During that pursuit you activated a contraption which was dangerous and caused smoke to be emitted from the exhaust."It is in very unusual circumstances that you find yourself before the court. I do not want to see you here again."
Labels: Motoring News