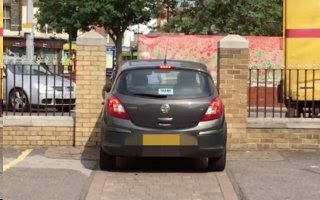 This is the hilarious moment a hapless motorist tries to squeeze her car through a gap that is clearly too small.Footage recorded in a car park in Gravesend, Kent, shows the driver of the grey Vauxhall Corsa trying to slot the hatchback between two brick pillars that form part of the car park wall which is clearly designed for pedestrian use................  but the driver perseveres with her efforts.A heckling onlooker shouts "keep going, you're looking alright" before bursting into a fit of laughter as the Corsa scrapes against the pillar.Realising that she's made a mistake, the driver then reverses away from the passageway before getting out of her car to inspect the damage she has just caused.
Labels: Motoring News