Motorist stopped on the M55 for driving without a tyre 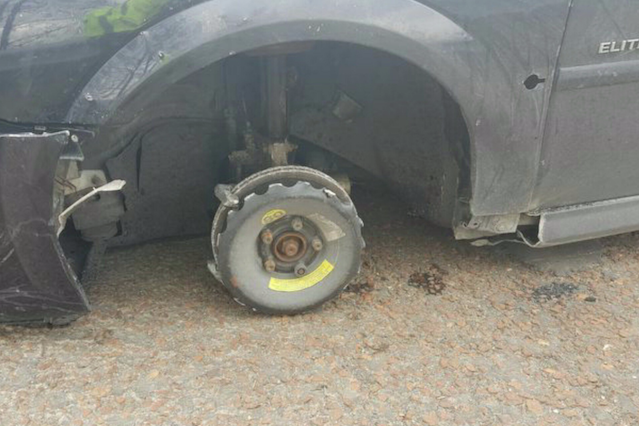 Traffic police in North Lancashire have posted images on social media of a vehicle they stopped on
Sunday in rather unusual circumstances.
Following a reports from members of the public, the patrol unit found the car driving on the short M55
motorway near Preston with an entire wheel missing. The photographs show only the shattered remains
of a wheel bolted to the front passenger side hub, with the rest of the wheel and tyre completely missing
Despite only having three wheels, the driver of the black Vauxhall Signum "Elite" was reportedly
unaware of any issues. What's more, they had clearly experienced earlier tyre problems, as what
was left of the wheel showed it to be a temporary space-saver.
- ADVERTISEMENT -
Space-saver wheels are intended only for very short-term use, as a stop-gap to get you to a tyre fitter or
garage to replace your damaged tyre. They are not recommended for speeds over 50mph, or for more than
50 miles of driving. It's also not advisable to fit them in place of a front wheel, as front wheels steer and
perform the majority of braking in addition to powering the car in a front-driven vehicle like this Signum.
However it's not clear what caused the wheel to fail in the manner it did.
According to the traffic officers' Tweet, the driver is due in court for "numerous" driving offences as a
result of their reckless actions
Labels: Motoring News