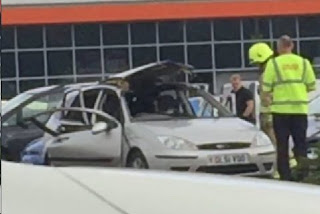 An air freshener has caused a car to explode in a B&Q car park in Essex.
Emergency services were called after a silver Ford Focus exploded in the DIY store's car park, leaving the windscreen, doors and roof blown out.

One person was injured in the incident which happened in Southend yesterday. Essex County Fire and Rescue Service said it was accidental, and happened after a cigarette ignited gases in the air freshener.
It said in a statement: "The explosion happened after a build-up of gases from an aerosol air freshener was accidentally ignited by a cigarette.
"We don't think this has ever happened before – it's not something we've ever seen before" 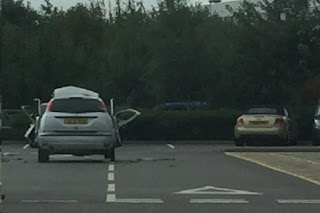 Passer-by Albert Quixall said on Twitter: "Just missed witnessing car explosion near Southend. Very loud bang. Ford Focus doors, windscreen and roof blown out. B&Q staff rushing to help."Experts have since advised against using aerosols in confined spaces.Temporary assistant divisional officer Justin Benson-Ryal told The Telegraph: "Incidents like this are extremely rare, but it is important for everyone to be aware how flammable aerosol cans, such as air fresheners and deodorants, can be"