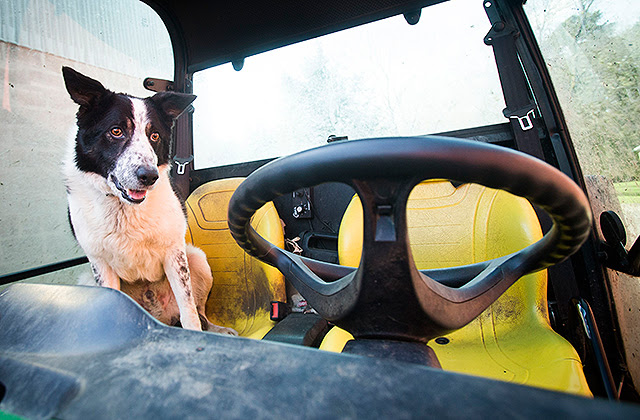 A farmer whose sheepdog took 'control of a tractor' and ended up on a busy motorway has spoken of his relief that nobody was hurt in the incident. The bizarre event, which caused tailbacks on the road, was reported this morning by Traffic Scotland at junction 13 of the M74 near Abington in South Lanarkshire.  The transport body tweeted: 'M74 (N) J13-RTC due to dog taking control of tractor... nope, not joking. Farmer and police at scene, vehicle in central res.'

It later emerged that the sheepdog in question was Don, who had been sitting alone in the passenger seat of his owner's farm vehicle when the farmer went to tend to a lamb. Owner Tom Hamilton, of Kirkton Farm in Abington, explained: 'I was checking the sheep up on the hill and I got out the Gator (utility vehicle) to see a lamb. I left the Gator sitting and the dog was sitting on the seat. 'I'd almost got back to it when it started to move. I ran after it and I fell. The next thing, it was going down the bank, across the motorway and it hit the crash barrier in the middle.' Mr Hamilton said he first felt shock upon seeing the events unfold before his eyes, with Don still sitting in the truck.

'I was glad I didn't hear a crash'

That later turned to relief when he realised no cars or lorries had hit his vehicle. 'I was glad I didn't hear a crash or anything because I couldn't see the motorway,' he said.

A road maintenance man came along at the same time and stopped the traffic, so that helped, and then I went down and got it and came back up the bank again. 'I was so relieved to see there wasn't a smash up. There could have been a right smash, it was a busy road. It's a relief no lorries or cars hit it. You were listening for a crash.' Mr Hamilton said his state of shock was such that he initially forgot to collect Don from the scene, but soon returned to get him. It was reported that the dog had leaned on the controls of the tractor, taking it from a field on to the road.

But Mr Hamilton believes the handbrake probably just wasn't on tightly enough. He said: 'The handbrake was on but it hadn't been up to the last nick. It couldn't have been on tight enough. '(The vehicle) sat for ages. I might have been 10 feet from it when it took off.'  The truck's windscreen was smashed but it suffered no other damage.  Don has a slightly sore front foot but is otherwise said to be fine. Mr Hamilton said of the dog: 'I think he's in shock too, just with how it happened. He might get a special meal tonight. He's well looked after.'

The incident caught people's interest on social media and shortly afterwards Traffic Scotland provided an update: 'M74 (N) at J13 - Route is clear from earlier incident and dog is fine. Has to be the weirdest thing we have ever reported! No delays in area. 'Police said the only details they had on the incident were that a vehicle had gone through a fence near the motorway at around 8.15am.

The incident led to plenty of dog puns as people responded to Traffic Scotland's tweets.  Tony T wrote: 'Police investigating, so far no leads', while Beverley Friend added: ''This is barking.'  Michelle Muirhead asked: 'Will the dog have points on his licence? Was he breathalysed? Did police arrest him?'