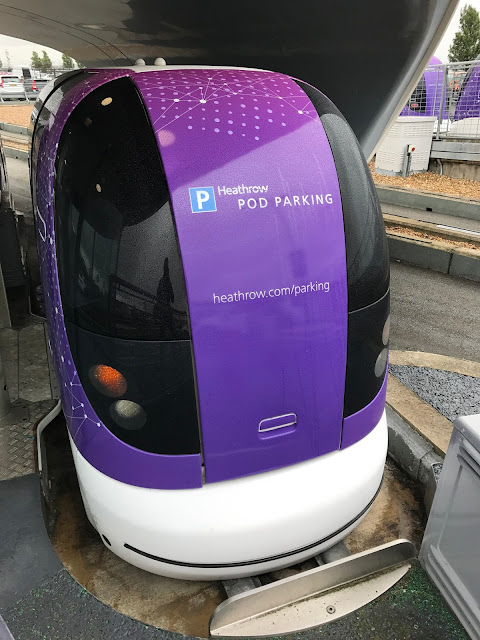 A couple of weeks back I had the pleasure of my first ride in an Autonomous vehicle. I must admit, it wasn't as special as I thought it would be. It was infact a little bumpy and it wasn't that stylist either, yet it meet a need.

I needed to travel to Scotland for my work and the office had booked me a flight out of Heathrow Airport. Normally my choice of airport would be Gatwick. Trips through Gatwick Airport often entails long term parking and a bus ride to the terminal. But with no available flights from Gatwick, it had to be Heathrow - and I decide to use the Pod parking and take the Pod Transfer vehicle to the terminal

It's a 6 minute ride along a thin roadway high above the ground. It seemed some what unremarkable considering the technology behind the system. The vehicle uses a number of sensors and laser technology to keep track of its position along a fixed route. It's steers, accelerates and brakes automatically according to the conditions of the road and the traffic and parks perfectly for the passenger to embark and disembark. It also knows where the other pods are along the route. It has no steering wheel and no controls for anybody in the pod to control and interact with the vehicle - other then closing the doors and pushing go.

It's claimed that it will save 100's of bus journeys each year and of course it's electric, some what kinder for the environment. The biggest plus for passengers is journey times from car to terminal are much shorter then waiting for the transfer bus and battling with traffic between Car Park and Terminal.

It's clear that the Heathrow Pods could be the future of motoring. But not for a while. These Pods are at Autonomous level 4: A vehicle that can drive itself without user input within a set area. There are five levels of autonomous set by the auto industry.
Currently we have many examples of vehicles reaching level 1 and 2. Many of the very latest high end cars have various features fitted which can be switched on depending on the type of road and traffic conditions. The famous electric car manufacture, Tesla has developed the most advanced level 2 Autonomous, with its autopilot function that's enabled in the US. It's well known that Google has been testing level 3 vehicles. Google has positioned themselves nicely in terms of mapping data with Google Maps and Street View data available to them.

Research has found that users are less likely to take control of the vehicle as quickly as necessary when an incident occurs and user input is needed.

Google is not the only firm to test autonomous vehicles. Ford and Hyundai have too. However research has found that users are less likely to take control of the vehicle as quickly as necessary when an incident occurs and user input is needed. This is due to lack of concentration needed on the road ahead and around them while the vehicle is in autonomous mode. The user may feel the need to do other tasks, like read the paper or reply to emails. The law is clear, you must be in control of your vehicle at all times. But it my become less clear in the future with autonomous vehicles, and something that will need to be sorted out in the future in various states and countries around the world.

I would suggest that Autonomous Level 5 is some way off yet. But the fact that Heathrow has a system that's reached level 4 (I'm sure it's not the only system in the world that's reach this level) is either encouraging or worrying, depending on how you feel about a computer taking complete control of your driving pleasure. In the mean time. I'll be very happy to take the Heathrow Pods again, it certainly saved me time from Car to Terminal, its just so dam far from my home here in Kent.