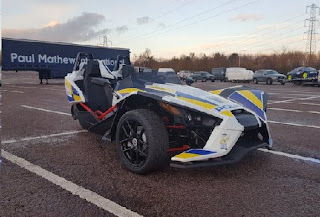 Motorway police have dreamt up a novel way of promoting road safety, and it involves a 130mph, Batmobile-style three-wheeler. The police-liveried Polaris Slingshot motorcycle was unveiled at this weekend's Autosport International Show at Birmingham's NEC. The two-seater was used by the Central Motorway Police Group, which covers about 400 miles of motorway in the West Midlands, as a talking point to promote road safety, alongside a virtual reality driving simulator and other audience-engaging activities. A giant CMPG bear named Perry and police dog Yasmin manned the force's stand alongside a team of officers.The Polaris was displayed alongside other high-powered Police vehicles, which included a Vauxhall Insignia VXR, BMW 1200RT and a Ford Focus RS.
The CMPG later queried its Twitter followers with a poll, asking which was their favourite of the four. The Focus RS took the top spot, with almost half of the 257 votes. In second position was the BMW motorcycle, third was the Vauxhall Insignia, and finally the Polaris – surprising, considering its popularity at the show.  Unfortunately, the two-seater will not be seen pursuing criminals, Batman-style, as it isn't a permanent addition to the force's fleet. Instead, it was on loan from Polaris. The CMPG bade farewell to the powerful machine yesterday, announcing on Twitter that it was being returned to the manufacturers. "Sadly we've had to return the #slingshot to @UkPolaris @Slingshot," it wrote. "Thanks for the loan, it was a great talking point to promote road safety."
Labels: Motoring News