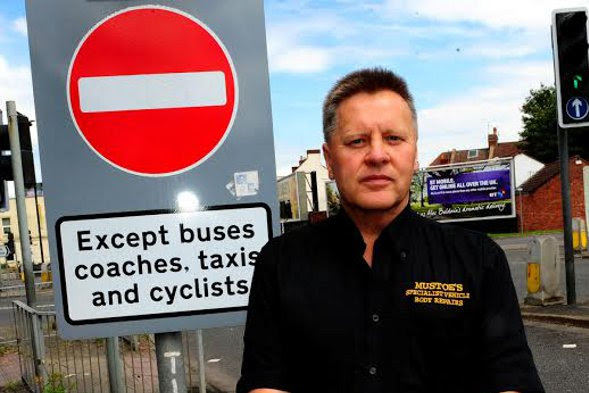 A Bristol motorist has won a legal battle over a No Entry sign that he claimed was tricking drivers.

Eddie Mustoe, 54, was caught driving past the sign and given a £60 fine and three penalty points.

But, he says, it was an honest mistake - and he's spent a year proving his case. He's now been cleared of failing to comply with a lawfully placed road sign by magistrates in Yate, South Gloucestershire.

"I was stuck in the lane not knowing what to do and I could not reverse, so I had to drive down it," Mr Mustoe said

"The police followed me and pulled me over and when I looked at the sign I thought it was like no other I had seen before and so it just did not make sense to me."

The grey, rectangular sign carries the standard circular red and white 'no entry' sign above the words 'Except buses, coaches, taxis and cyclists' in black and white.

However, by law, such signs should instead show images of the permitted vehicles and the single word 'except'.

While Avon and Somerset police say that they haven't issued any tickets to motorists for for contravening the sign in the past 12 months, it has been in place for 30 years.

Mr Mustoe describes it as a 'cash cow' - and his solicitor, Marcus Lavell, says he believes large numbers of motorists may have been caught out.

"Given the duration of the sign's use and the fact that this is a major junction in the centre of Bristol I would have thought several thousand motorists would have been caught over the years," he says.

Motorists caught out by the sign may now come forward to take action against the council.

Last summer, a similar minor blunder in signage allowed hundreds of people to claim a refund of parking fines, after a warning sign was found to be positioned three inches too low.

When Swansea councillor Sybil Crouch received a fine after parking in a loading bay by mistake, she challenged her ticket and won. It emerged that 320 people had made the same mistake in the previous nine months; all were promised their money back
Labels: Motoring News