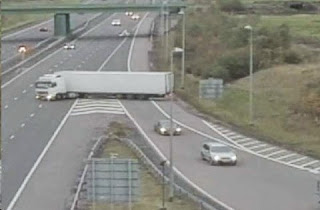 Police have released 'shocking' CCTV footage of the moment a lorry driver performed a 'highly dangerous' U-turn on a motorway after driving the wrong way up an exit slip-road.

Leonid Papachin performed the manoeuvre in a 40-tonne truck on the M6 Toll in Staffordshire.

He was also given an 18-month driving ban and made to pay £85 costs.

The Lithuanian had been working in the UK for two months when he committed the offence on 23 October.

Motorway patrol manager Chief Inspector Jed White said: 'Unfortunately this type of incident is all too common on the motorway network, especially the M6 Toll, where drivers attempt to avoid charges for using the road.

'On this occasion the driver should have contacted motorway police immediately to help him manoeuvre safely.

'We will always prosecute offenders and, as this case demonstrates, the penalties can be quite severe. Our CCTV systems cover the majority of carriageways and are monitored 24/7, so there is no hiding place.

'I hope that it serves as a deterrent to anyone who thinks they can put other motorists in jeopardy by ignoring motorway regulations.'
Labels: Motoring News 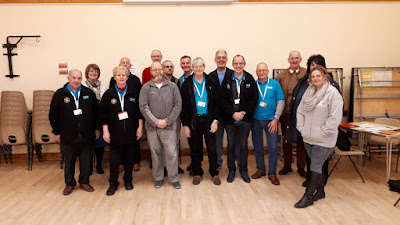 Another success for the KGAM - well done team!!